The railcar industry continues to work through the repercussions of ongoing changes in tank car standards for Class 3 flammables. Following the increase in crude by rail (CBR) transport and subsequent concerns about the DOT 111’s safety, railcar owners shifted first to the American Association of Railroad (AAR) “good faith” standard CPC-1232 and then to the DOT mandated DOT 117J. Even as the industry adapts to DOT117 and makes good progress towards upcoming deadlines, there are signs that standards may continue to shift with last years’ news that BNSF is refusing to offer contract rates for DOT 117R cars due to safety concerns. As a result, railcar owners who have spent the last decade upgrading and re-upgrading cars are looking at again potentially scrapping significant capital investments.

In contrast, while the standard changes have pushed up lease rates, lessees have made out comparatively better than owners by avoiding the cost and capital risk of placing bets on which standard would win out. The market looks like it will continue to evolve over the next few years, and leasing continues to be a smarter option than owning to avoid the risk of stranded assets.

Concerns about flammable tank car safety coincided with the emergence of shale crude and subsequent rapid increase in CBR in the early 2010s. As railcar volumes picked up from the Bakken fields, dangerous incidents of rail car derailments attracted industry and government attention to railcar safety. In 2011, the American Association of Railroads (AAR) issued a new voluntary industry standard for rail cars carrying Class 3 flammables named CPC-1232. While technically still DOT 111 cars, the cars were referred to by industry as CPC-1232. The new standards required thicker walls and other modifications detailed in Table 1 below. Per the Railroad Supply Institute, 55,000 CPC-1232 cars were produced representing a capital investment of about $8 Billion[1]. 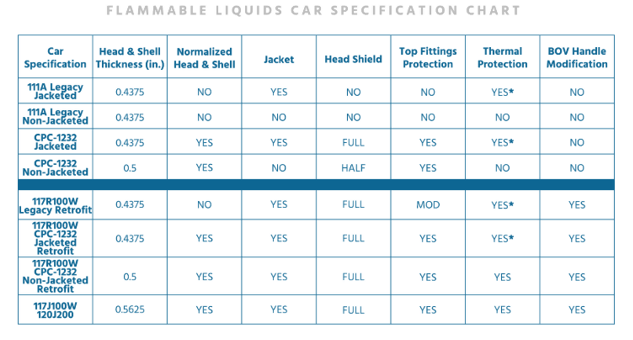 However, major incidents continued to occur, prompting the Pipeline and Hazardous Materials Safety Association (PHMSA) to complete a full review of the standards. In May 2015, the agency released HM-251 which introduced the DOT 117 standard but only covered certain cars. Following industry pressure for more complete legislation, the FAST Act was developed in collaboration between industry (including the AAR) and Congress. DOT 117 required thicker tank walls than CPC-1232 as well as modifications like a carbon-steel housing around top fittings and thermal protection in case of a breach. Table 1 details the major requirements of the Act. The regulation allows cars to be retrofit to the new standard which would be classified as DOT 117R.

Table 2: Deadlines for Compliance with the FAST Act per the Railroad Supply Institute[1]

Per as of May 2019, 24,354 railcars had already been retrofit and 27,085 new DOT 117J cars have been introduced to the fleet[1]. That leaves about 55,000 cars to either be retrofit or scrapped to bring the fleet to full compliance with the rapidly approaching FAST Act deadlines as outlined in Table 2. Figure 1 below from the RSI shows the current state of the industry’s fleet transformation. 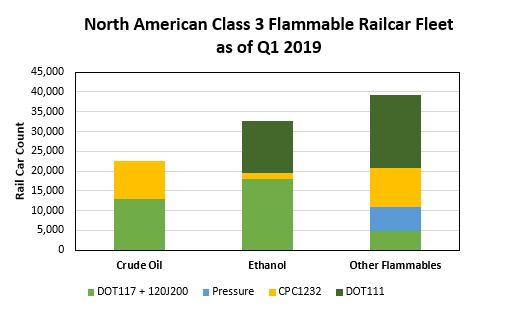 The constant changes have put a substantial burden on railcar owners as they try to meet the ongoing shifts in regulation.

For the second time in a decade, railcar owners are again bearing the costs of updating their fleet to comply with new standards. While initial government estimates placed the retrofit costs at $32,900[1], recent industry estimates by Railway Age place the cost of retrofits at about $60,000[2]. While many railcars are being retrofit to comply with the standards, many older cars are simply being scrapped because of the cost to retrofit them, forcing owners to write-off workable assets and purchase new cars which have been estimated at $174,000[3]. When the standards were being proposed, the Wall Street Journal quoted David Nahass, senior VP of Railroad Financial Corp as saying, "The people who own these cars are not going to put an overwhelming amount of money in them. There are going to be many cars that can't or won't be retrofitted.”[4]

In addition to the direct costs of the retrofits, railcar owners are also losing revenue on the railcar while it’s out of service. When providing feedback on the legislation, the American Petroleum Institute (API) estimated the retrofit time per car as 155 days for bare DOT 111 cars, 147 days for jacketed DOT 111 cars and 117 - 125 days for CPC-1232 cars. That equates to a full third of a year’s lost revenue for each railcar retrofit[5].

Finally, as the fleet rushes to get retrofitting over with, retrofitting capacity is decreasing which is further increasing both the estimated time out of service and direct retrofitting costs. While overall capacity has increased since the regulations were issued in 2015, the increases haven’t been enough to meet the demand. Figure 2 below from RSI shows the increasing capacity over time with shops now averaging about 960 cars/month with May 2019 reaching just short of 1200 cars/month[6]. At that rate, the industry will meet the 2023 deadline, but only just. 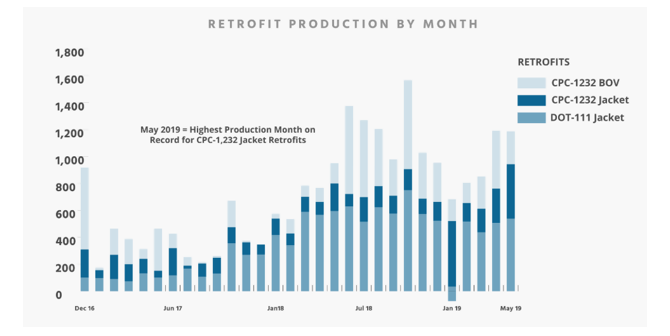 In parallel, the changing standards have also increased railcar leasing rates both through increasing direct costs and tightening the supply/demand balance of flammable rail cars.

On the direct costs, lease rates have increased as railcar owners try to recover retrofitting costs. For example, lease rates for DOT117s increased to $1000/month last year compared with $400/month a year prior[1]. Recent market quotes from PFL Petroleum show offers for a 36-month lease of 50 CPC-1232 cars at $950/per car. DOT 117R offers were slightly higher at $1000/per car for a 33-month lease of 100 DOT 117Rs. DOT 117Js were highly in demand, with bids outnumbering offers[2].

At the same time, the rush to retrofit is leaving many cars out of service which is tightening supply of railcars and further increasing lease rates. Overall utilization rates are increasing and are expected to remain high for the near future[3]. While some capacity is expected to become available with orders of new cars being delivered, capacity is still likely to be tight over the next few years as deadlines approach[4].

Still, in the face of changing standards, lessees have come out ahead compared to railcar owners. While owners bear the brunt of the full railcar asset on their balance sheet and therefore must decide to do costly upgrades or write off the asset (and taking a substantial hit to their Return on Assets), lessees can return their older cars at the end of the lease term and upgrade to a newer version. While lease costs may increase, lessees don’t worry about out of service time, the hassle of retrofitting and certifying an older car or the expense of purchasing a new car. Even with higher lease rates, the total cost is substantially lower than the $60,000 retrofit costs and added lost revenue while the car is out of service.

While railcar book life can extend up to 20 years, lease terms are usually 3-7 years. With the rate of developments in Class 3 flammable standards, the shorter time horizon provides lessees the flexibility to switch easily to new cars at the end of their lease term rather than having to struggle with outdated cars for decades.

Trouble on the Horizon for the DOT-117R?

To add insult to injury, there are signs that the standards for Class 3 flammables will continue to evolve and pose a risk of stranded assets for railcar owners. BNSF announced last year that they would not provide contract rates for DOT 117R rail cars on their lines due to safety concerns. While the DOT 117R cars fully comply with legal standards and are widely accepted by industry, some recent spills have raised concerns about the safety of the retrofit cars. BNSF announced that it would only allow provide contract rates for new DOT 117J cars[1].

This development again puts railcar owners in the position of potentially scrapping assets with significant investment. In contrast, as in the past, rail car lessees can simply upgrade their cars to new DOT 117J cars at the end of their lease. The announcement underlines the reality that standards are likely to continue to develop over the next few years. As the market continues to evolve, avoiding a risky capital outlay and shifting standard risk to the railcar leasing companies looks like a smart move. 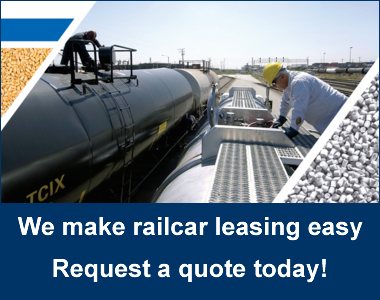